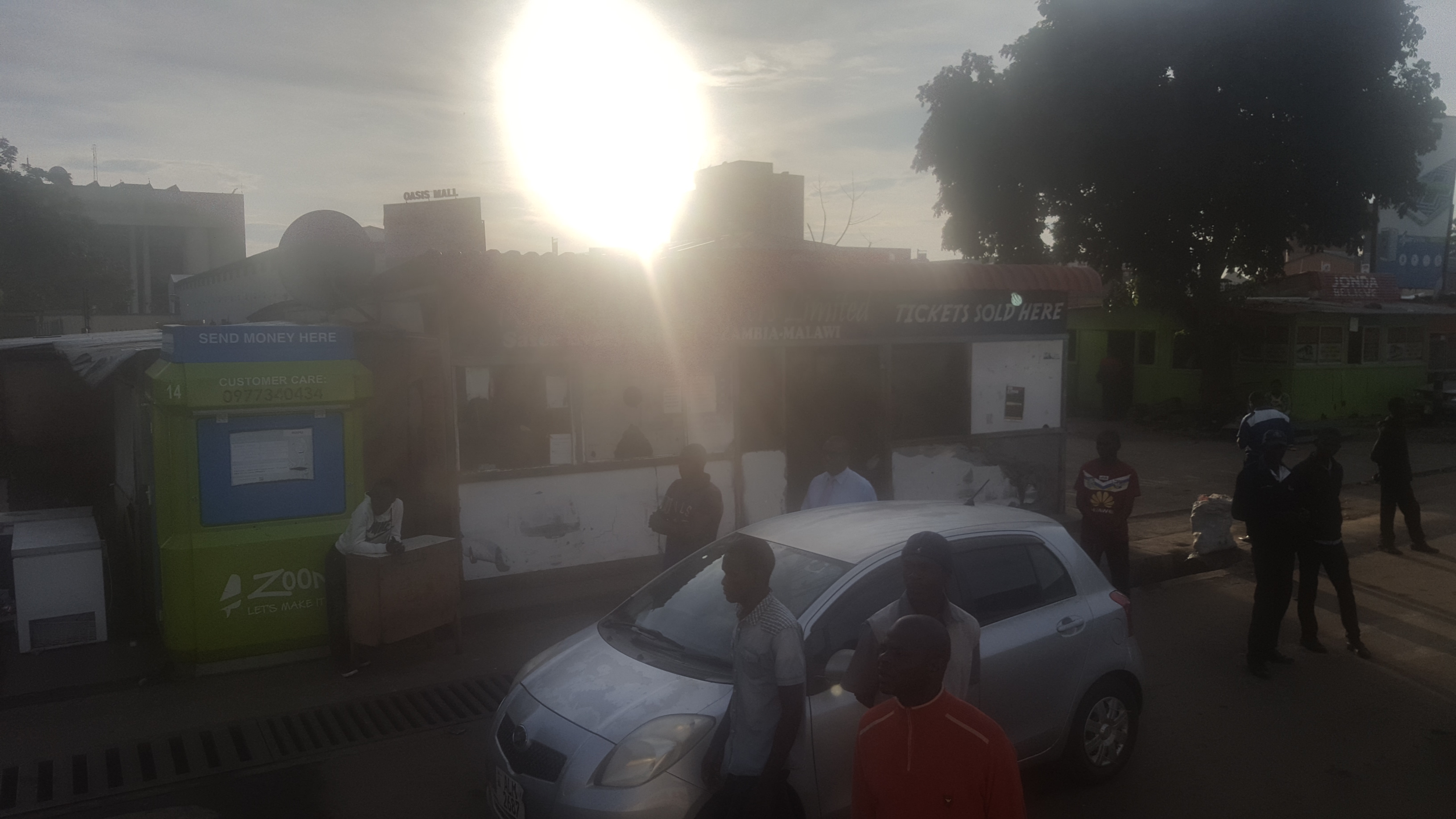 If you want to move from Lusaka to Lilongwe by Bus there is only one option, as far as i know: You buy a ticket from the company called Kobs. Okay, here we go!

The staff from my backpacker called them for me because i ran out of talktime (thats how they call deposit on your prepaid simcard) after i called two mobilenumbers that are spreaded everywhere in the net, leading to a poor guy that has nothing todo with that company. The guy from the backpackers told me there would be a bus starting at 5am on Monday, Wednesday, Friday…. and Saturday or Sunday, as i remember correct. He told me it would be good to buy the ticket a day before or go to buy the ticket at 4am before departure. I decided to walk the 25minutes to the Intercity-Busterminal to get the ticket safe one day before departure and extended my room at the backpackers.

As i was moving into the crowded weird busterminal many guys came and offered there help, as always in busstations or wherever you go as a white guy inside zambia, asked me where i wanna go and wanted to assist. It took me some minutes to walk around the station one time without finding the Kobs-Ticket-Office. I just saw a empty new cement-bulding with the name Kobs sprayed on one of the windows in the row – seems as they try to bring some alignment and order to the busstation in future. Finally i followed a guy that leaded me friendly to the Kobs-Ticket-Counter. I choosed my seat on a paper and bought my ticket for thirtysomething US-Dollars, what was 235 zambian quatscha.

Okay, that was easy. The difficult part was now just to get up at quarter past 4am in the night to reach the busterminal in time. Somehow i did it, walked through the empty streets to the station im the dark, bought myself some water and some potatoechips at the little shops inside the station before i headed to the place where the busses from Kobs should be located. Just in time, 10 minutes before departure at 4:50 i stood next to two busses. I asked for the bus to Lilongwe, they pointed me to the bus infront of me. At the door one of the staff pointed to the next bus as i asked him for Lilongwe again.

I Jumped into the almost empty bus that has really 5 seats in a row and 70 seats in total, what means that you really have not much space on that estimated 12hour-ride. I found my empty seat, put my backpack above my head, and sit down. The bus next to mine left the station some minutes later.

A lot of guys selling batterypacks, flashlights, bisquits, drinks, sweets, earphones, talktime, pockets, parfume, shoes, cloths and more entered and left the bus. I thought about getting a bottle of wine and asked one of the earphonesellers if he likes to get me one. It would be far he said, and then he left the bus 5 minutes to 5am. I didn’t expect that we would still be in the station when he came back 45 minutes later, but i was wrong. I didn’t recognized him first but he started talking to me and told me, that he would have been here and that he was looking for me but he wouldn’t have found me. I told him that i haven’t moved and asked for my wine. It’s very close, we can go together he said now. I explained that i am afraid that the bus would leave without me. He laughed. The guy next to me was already upset aswell cause departure should have been 5 and it was already almost 6. I asked one of the staff outside the bus through the window when the departure would be, in an unfriendly way he replied i should check my ticket, the time would be on it. I told him that my ticket says 5am. He replied there would have been another bus leaving at 5 and i would have been late. I told him that i was 15 minutes before departure over here and that i was told to use this bus. While he walked away he replied that i was misleaded then. Our conversation ended around 5 minutes past 6.

After some minutes i shouted to the next staffguy. I tried to explain him that they should switch of the engine of the not moving bus, that it’s a waste of petrol, that it smells bad, makes us sick and destroys our planet. He replied that it would be a big engine. Sure, one more reason to switch it off! I asked him if he is educated. He replied no and offered me his phonenumber, because i was educating him already. I asked him for which purpose then the engine would be running all that time. He tried to explain that there would be some pressure and some plates where water runs through and it would be important to run it 24h hours. I told him that it is not true and he should switch it of. I said PLEASE to him so many times and repeated that it is bad to keep it running until he walked away while he said he would switch the engine off.

I was used to the drivers keeping their engines running all the time but i was getting more and more angry while i waited at this busstation surrounded by 50 busses, all running without moving, wasting liters of diesel and pushing dirt in the air.

I tried it multiple times. We are moving replied one of them, but we weren’t and he knew that. I think it was about 6:20. My neighbour asked again one of the staff: when will we departure? 6:30 was the answer. There were still coming more passengers into the bus and i had already understood that they was just waiting until the bus is full and my ‘reservation’ was for the first bus, but it must have been filled with other customers that reached earlier. The bus started to move inside the station at 6:49, stopped again multiple times to load more passengers. finally we moved out of the station at 6:55.

Okay, no flight is booked for the evening, no things that have to be done, just two hours of wasted time, doesn’t matter – but honestly they should not try to tell their customers that bullshit and sell tickets for 5 and leave when the bus is full, and damn, they should switch of their fucking engine!

I wrote that on a list in capital letters where i had to write down my name, my destination and phonenumber.

Before i could start to enjoy and while i was already writing this article, my neighbour asked me: have you understand what they said while the bus has stopped a minute ago at a small busstop. No. There is a problem with the bus, we have to go out and there will come Another bus.

Right now it’s 8:23, i am still in Lusaka, staying in the hot african sun, together with that other 65 african people waiting for that bus, for more than an hour.